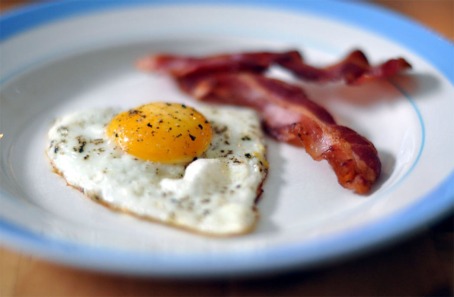 The New Year is upon us, and it’s brought with it the final season of Downton Abbey. Okay, I realize that it’s a soap opera in a nice house, but just watching Maggie Smith shred the scenery is worth tuning in. Personally, I’ve enjoyed Julian Fellows rendition of British high society. Of course I loved him as Lord Kilwillie during his run on Monarch of the Glen.

One might hope that the prospect of a new year would inspire a person to higher aspirations than the new shows on PBS and Netflix, but I’m willing to admit to being pretty excited with it all. At my age, television plays a major role in my life during the period from seven to nine in the evening.

It has become our routine to wait until a full season of our favorite shows is picked up on Netflix, thus keeping us from having to figure out the TV schedule each night. Soon we’ll have new seasons of Longmire, House of Cards and Madame Secretary, and life will be good again.

Breakfast is my favorite meal, and Clista has gone to great lengths to make it special. Normally she will prepare an egg, either scrambled or fried. This sounds simple enough, but I’m a little picky about my eggs. I want my scrambled eggs runny and my fried egg with no sign of congealed yolk, and Clista makes a real effort to do them just right.

Along with an egg, she’ll fix some form of breakfast pork. I’ve made a diligent effort to find the best of the best in the meat department, and I can recommend Tennessee Pride patty sausage as the leader in the clubhouse. Conecuh and Williams Grocery are tied for the smoked sausage title, and Clifty Farms makes the best country ham and streak-o-lean. Oscar Meyer’s organic bacon tastes like bacon did before they bred the taste out of pork.

While on the subject of breakfast meats, I’d like to share Clista’s secret to the perfect preparation. She places about an eighth of an inch of water in the pan before she begins frying the meat. To me this is counter-intuitive, but it works. The flavor is enhanced with no loss of crispiness. She saw this on one of the cook shows and she’s used it since.

Along with the eggs and meat, she’ll serve either toast made with Public’s Egg Muffin Bread or Mrs. B’s frozen biscuits. The egg muffin bread, when buttered and placed in the toaster oven, turns a golden brown and has a rich, nutty flavor and it’s not gummy like regular bread. Mrs. B’s biscuits are so good that we will gladly eat them in spite of Clista’s skill in making the homemade version.

When it comes to coffee, we have a parting of the ways. I drink Community New Orleans blend with just a touch of chicory. I make it strong, using four scoops of coffee for two full mugs. Clista refers to this as sludge, and makes her own Starbucks Dark Roast. No relationship is perfect.

My grandson Jackson joined me for lunch at Bojangles and an afternoon of football yesterday. He is recovering from the surgery on his ACL that has sidelined his skiing and baseball seasons. Jackson was a ranked mountain skier, and losing a year will make it tough to regain his ranking. I was worried about his frame of mind, but he shrugged it off and decided to try out for a part in the spring musical. The kid is nothing if not resilient.

We watched Auburn spank Memphis State, and saw Dak Prescott’s final game as a Mississippi State Bulldog. Dak went out in style and lit the scoreboard up with 51 points. He holds 32 school records, and he’ll be remembered as the best ever at MSU. I enjoyed watching it with Jackson, and really enjoyed his witty remarks.

This week starts my annual beg-a thon. Unlike PBS, which is begging for financial support, I’m begging for subscriptions—but checks will be accepted as well. As I Like it has no economic component. We don’t sell advertising or rent out our subscriber’s list. Our only scorecard is the number of subscribers it attracts. Our year end statistics show that we have over 500 regular viewers, but only 220 subscribers. I was surprised to see that people from 95 countries visited the site in 2015.

Clearly, there are people reading my post who don’t subscribe. Why do I want more subscribers? Truthfully it’s a combination of ego and Google placement. It soothes my ego to know there are people who like what I’m doing enough take the few minutes needed to subscribe, and the more of those people, the higher our ratings with Google and the other search engines. Here are the instruction to subscribe.

Go to www.tomlawrenceblog.com and you will be on the home page. Look to the right hand side of the page under the photo of the handsome guy, and find E-MAIL SUBSCRIPTION and follow the instructions. Once you sign in, you will receive an email asking you to confirm your subscription. Thank you in advance for taking the time to do so.

The eggs and bacon image is licensed under CC By 4.0 — linked to commons.wikimedia.org