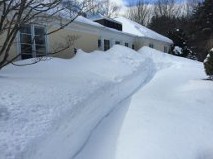 My friends Phil and Alice Hayen live in historic Concord, Massachusetts. Yes, that Concord—the one with the bridge made famous in 1775. Concord is also the home of Henry David Thoreau and Walden Pond, along with that of Ralph Waldo Emerson. There is enough history within walking distance of their home to populate Wikipedia. The only problem is, that walking anywhere in Concord has been impossible for the better part of a month. They are up to their roof in snow.

Now, Alabama is not totally immune to the ravages of winter. Just last week, Huntsville, in the northern part of the State, had a serious snow storm with accumulations of 4” to 6”. It snarled traffic up on I-65 for a day or so, and then it melted and went away. It started snowing in Concord shortly after Labor Day, and they have accumulations of seven feet, with more on the way. It shows no sign of melting and going away.

I spent a winter in Lorraine; Ohio back in the 1970s, and marveled that part of the basic costs of home ownership, involved paying to have your driveway shoveled. That seems small potatoes now; Phil has had to have his roof shoveled. He did manage to get a deal on the roof, by including the shoveling of one of his doors, thus giving him dual egress from the house—if you include the window he has been crawling out.

In his note to me, he mentioned how much fun it was to grill steaks on the fireplace in his living room. It seems that his outdoor grill is under a ten foot snowdrift. The weather has been so bad that the deer have been unable to forage, and are feasting on Alice’s shrubs and decorative plants. They have to plow through snow up to their stomachs, but they seem to be toughing it out. Deer are hardy creatures.

Normally, Phil and Alice will spend this time of year visiting friends in South Florida. This year, some medical issues prevented their exodus, and allowed them to fully savor the worst New England winter in memory. The Boston area has had 109’’ so far, and it’s still snowing. Assuming spring finally arrives and the snow actually melts before July 4, the Hayens will head to France to visit their daughter and grandchildren. I’m willing to bet they go to Florida next January.

There are many advantages to living in L.A.—lower Alabama—not the least of which is the weather. I can say without fear of contradiction, that we will never have to pay to have the snow removed from our driveway—let alone our roof. All in all, our weather is quite lovely, with beautiful springs, fall, and mild winters. Summer can be a little toasty, but after growing up in the Mississippi Delta, our summers don’t even approach really hot or really humid.

Phil and Alice will survive the winter of 2015, with some nifty photos and interesting tales, and chances are, next winter will not be nearly as bad—probably no more than five or six feet of snow. I feel pretty certain they’ll enjoy it from someplace like Marco Island.